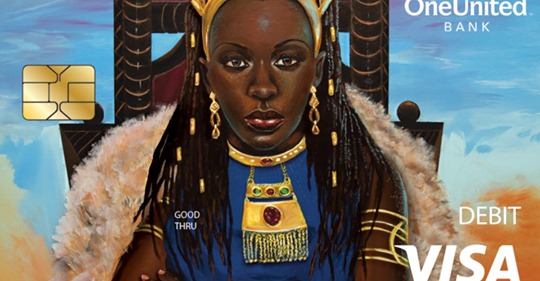 The largest Black-owned bank in America is paying respects to Black queens all over the country. OneUnited Bank launched a Queen Visa Debit Card under its Royalty Campaign to recognize the women who exude #BlackGirlMagic, according to a press release.

OneUnited bank introduced the Queen Card in March during Women’s History Month under the Royalty #WearYourCrown Campaign to raise awareness of  the #BankBlack and #BuyBlack Movement across the nation.

“We agree with Maya Angelou,”  President and COO of OneUnited Bank, Teri Williams,said in a statement. “If you’re always trying to be normal you will never know how amazing you can be. We encourage the Black community to celebrate the amazing past, present and future Queens in our community.”

The bank is recognizing women in various career fields, including scientists, educators, entertainers and activists, who all made an impact on the world.

In February, the bank launched a Black History Month campaign with a King Visa Debit Card under its Royalty Campaign as well. They find it important to celebrate “the new generation of kings and queens” in the country.

OneUnited Bank supports its community “by promoting financial literacy and offering affordable financial services” and this campaign embodies what it means to recognize trailblazing women who are making a difference.

Black women have been especially making significant strides in entrepreneurship. From 2007 to 2018, the total of black women-owned business grew by a whopping 164 percent. In 2018, 2.4 million Black women owned businesses across the nation, according to Forbes. In almost every sector, Black women reign.